David Brunet, France’s 2018 middle-distance runner-up and 2020 French speed champion, opened the doors of his vast loft in Cappelle-Brouck, near Dunkirk, for a series of three interviews about his career. Today, for the first of them, the member of Les Ailes Grande-Synthe, a heating engineer by profession, talks about his beginnings, his installations, his colony…

– How did you get started?

“When I was a child, there were pigeons at my grandparents’ home in Grand-Fort-Philippe. My father had pigeons but did not play. On my mother’s and grandmother’s side, there was also a pigeon loft. An uncle helped me, explained the basics to me a bit. My first competition took place in 1979, in Albert, in Picardie. I didn’t have any scorer at that time. Two years later, I went to an old amateur, a farmer from Gravelines, who had ringed three youngsters. I started with his pigeons. And then I played well. I even won a youth championship very quickly. Unfortunately, the following year, all my pigeons were stolen, about thirty of them. Then I started again with one of my brothers. The results started to come back. And then, in 1993, I was robbed again. All of it! I have the impression that as soon as you play well you attract people. At the time, however, I was in town, but all they had to do was climb the wall. In short, once again, I had to start from scratch. I played a bit for two years, and then I moved and went to Saint-Omer, until 2003. In 2008, I met Maurice Cassez, who was the Calais champion. He told me that he had just stopped and that he eventually had a few pigeons to sell me. I jumped at the opportunity and bought about ten pigeons. The results were immediately at the top. Finally, as I was making a lot of progress, I wanted to extend my pigeon loft and, looking for a bigger one, I was able to install it here, in Cappelle-Brouck, where there was a lot more room. We are then in 2011… »

– So Cappelle-Brouck is in a way a new start in your career?

“Yes, with immediately excellent results. Afterwards, I invested again in new pigeons and, compared to those of Maurice, there were by far better. I never really understood why. Still, the pigeons of Maurice did found their place here. I even did a lot of crossbreeding. Without much success. »

– What are your facilities?

“I have four lofts, two of which are young people’s dovecotes, which no longer play. My colony is divided into loft apartments of 12 pigeons and everything is on slatted floors. I have arranged the aviaries of the females from the back. It’s homemade and it’s very practical. Everything is made at home to save time and avoid spending hours in a pigeon loft. Thanks to this efficient organization, I now have enough time to devote myself to a project, that of seriously starting the long-distance races. That is to say, approximately, and initially, about fifteen long distances. » 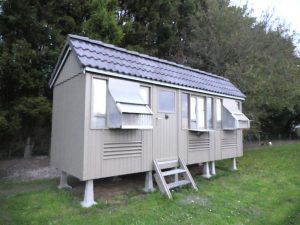 “In total, I have a little more than 150 pigeons, including 40 old pigeons and 20 breeding pairs. I raise about 120 youngsters a year, which I educate myself, so as to avoid having pigeons that are always circling around the truck. For me, the pigeon has to take its own direction by its own means, as soon as possible. »

– From which strain(s) was the colony built?

“Previously, when I was in my previous home, I had pigeons from Maurice Cassez, who was a Calaisis champion. At Grand-Fort-Philippe, the pigeons were walking very, very hard. But when I arrived here in Cappelle-Brouck, the results were disappointing. Therefore, I invested in pigeons from Stickers-Donckers, Hermann Donckers, Koopman. With this mix I managed to create a breed of my own that really defends itself quite well up to 400 km. It’s a breed that I’ve been flying for ten years now. »

– What is so special about these pigeons?

“A very precise sense of direction. As soon as they get out of the basket, they go straight to where they need to go and they have quite a bite. This is due to their character, I think, but also to the fact that they are trained individually. And all of that makes a real difference when they become adults. I have a habit of stopping the careers of players at the age of 5 so that, depending on the results, some of them go on to reproduction. When I reinvest in new pigeons, I do it on the best racers. From then on, I test the pigeons at the age of one year, and so on. Out of a hundred youngsters that I raise, I keep about forty. I don’t play either the females or the youngsters, because it means extra work. »