In Annoeullin (north France), Franck-Olivier represents the fourth generation of his family pigeon fanciers. For a long time champion of short distances, he is now turning towards long-distance races and what a success! The first (young) Ace Pigeon « Nord-Pas-de-Calais » 2020 comes from his colony.

Presentation of this french champion. In his garden a recently bought pigeon loft has found its place, the new breeding pigeons will soon be housed there. Franck-Olivier has been a speed distance player for a long time, he has been looking for new strains to play the long-distance championship, but he doesn’t give up his old pigeons for speed distance. Explanations: “My old pigeons are kept, they will raise the youngsters from the first brood of the new breeders so that I can make two tours of youngsters of my new pigeons in a very short time. I regularly change the pairs to test the descendants and find the right breeding pairs. I give myself three years, you have to be patient with the pigeons”.

He owes his success to his experience, his patience and good pigeons, and he never forgets to thank the others pigeon fanciers from whom he was able to find special birds. You won’t hear him in the video Pigeon Master, Franck-Olivier prefers to highlight others rather than himself.

Basically, Franck-Olivier have pigeons from his grandfather, Jean Dossche origins. Later, eggs were bought from Dany Dussaussoit (BE), youngsters bought directly from André Roodhooft (BE) as well as pigeons from Kévin Saudoyer (BE), Frédéric Leclercq from Taintignies (BE), Edouard and Edmonde Caudmont (FR), Patrick Dumas from Flavigny-sur-Moselle (FR), Mathieu Marchand from Phalempin (FR) and 2 pigeons from Bruno Bailleul (FR).

Franck Olivier likes the competition as much as the breeding “I am constantly thinking about which couples I will be able to form, sometimes when I have formed all the couples that I wanted there are still single pigeons left, I let them get together… This is what happened with the 204453.20 1e As pigeon NPC. She won her first two first prizes without any particular motivation (the pigeons were on perches) and then I played her on the nest. »

The pigeons are played both widowed and on the nest, for the nest playing there are 24 females housed in a special loft next to the breeding birds. With this method, only the females are played, as they are mated with breeding males or retired old pigeons. Pigeons played with this method have more freedom, sometimes Franck-Olivier releases them for a whole afternoon. 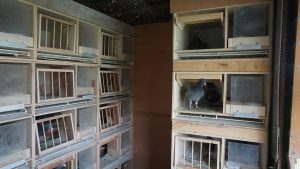 For the feeding scheme, he trusts a Belgian amateur, Frédéric Leclercq ofTaintignies, who launched his own range of feed a few years ago. The pigeons receive three mixtures: the “light prestige” at the beginning of the week, then they are fed with the “Prestige Recovery” to make the transition to the “Prestige Energy” which allows the pigeons to be inflated before the start. The youngsters are played with the moulting mixture. Concerning the food supplements, Franck-Olivier regularly changes brands ” so as not to get the pigeon’s organism used to always receiving the same thing and therefore keep a certain efficiency. this year I give products from the COMED firm, next year it could be the products of another firm. »

As everyone knows, maintaining a colony has a cost. Few pigeon fanciers know how much their pigeons really cost them, between food, material, vitamins… This is not the case for Franck-Olivier, he know the exact sum of all his expenses ” Every year I make a budget for my passion, in it, all the expenses related to pigeon racing are included, and I don’t exceed it ! ». Despite very demanding work, Franck-Olivier has been able to maintain his colony at a high level whatever the distances played, let’s wish him success in his breeding for the year 2021.