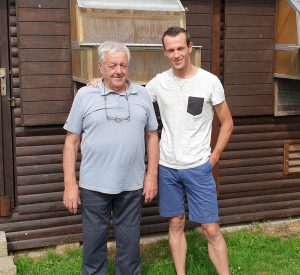 Back to St Jans-Cappel where Michel and Nicolas are in full preparation for future international competitions.

Their beginning of the season is very promising, they start on Argenton federal yearlings with the two first prices.

Michel presents us his pigeon

Nicolas presents us the second

A fortnight later with two other pigeons, they shine in the province of Hazebrouck, because they win the federal competition of St Yriex with the Fr-18-258564 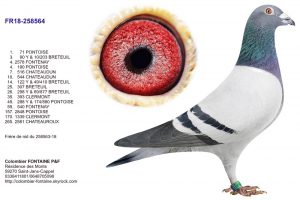 and make a nice third place with the Fr-17-357815. It is often promising for the race of Pau, at the end of June, when a team shines in the last preparation stage before the International competition. We’ll know very soon, for nine old pigeons engaged in that race.

Michel and Nicolas experienced a 2020 season that left them with good memories and the assurance that they were on the right track with, they achieved : 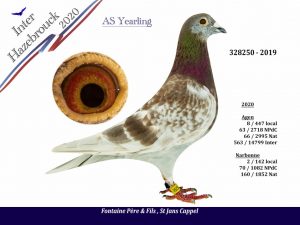 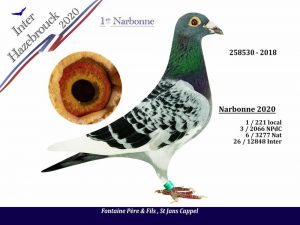 In the breeding loft only one reinforcement, in the off-season a superb female of Verweij de Haan origin and of the New Laureat line, which is carrying a lot of hope and which comes back in the blood of their previous acquisitions.

This year they have built up a great team of 40 oldsters and 9 yearlings who occupy the 4 compartments for the international competitions.

After the 9 pigeons in Pau, about 25 pigeons (old and yearlings) will be entered in Agen with either a middle distance stage or the Roulet Saint-Estèphe of the CALC as a preparatory competition, the choice is always made according to the weather conditions. Nicolas is planning four pigeons for the mythical competition in Barcelona. For the rest, we wait to see the first results and to know how the troops recover after the first three competitions.

Nicolas and Michel say that one should always be prepared for the possibility of a hard blow, indeed when one approaches the international competitions, one must expect to leave some feathers on the carreau and it is not the late André Deguillage who could deny it. For this reason, Nicolas places about ten yearlings each year in the youngsters’ loft to fill the empty slots. These will simply be trained as singles.