Jean Michel and Renaud have been present in championships of Boulogne-sur-Mer grouping for more than twenty years. This year again, they are successful with FR21110.18: 1st Ace pigeon in the group and 2nd Ace pigeon NPDC (North France region). 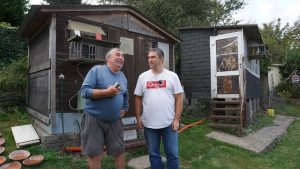 Why change when it works?  Systematically in first 5 places of the championship of Boulogne for twenty years and with beautiful successes in Nord-Pas-de-Calais events, this tandem is not really afraid of the competition in spite of a remote geographical position. The colony is located at the front point of the Boulogne group, Jean Michel and Renaud get the best out of the game when the weather is hard “if the conditions are too good the pigeons go to the back point and it’s our colleagues from the north of Boulogne who take advantage of prizes“.

Jean Michel got his first licence in 1957, son of fancier he passed on his passion to Renaud (46 years old). Together they play the whole programme with specific aim of scoring in federals contests (from 350 to 750km). Renaud has already tried to introduce his father to the internationals races but without success… “It’s too long to wait and we risk losing a lot of pigeons“. In the Querbes family, it’s the older generation that doesn’t have much patience: “Once he tried to play Barcelona, but he wasn’t really interested… even if he win prizes“, Renaud laughs.

In the colony we find well-known origins: Gérard Fruitier, Rosens, Batenburg, Van pool… Jean Michel was a friend of Gérard Fruitier, Champion of Pas-de-Calais who marked the world of pigeon racing for nearly 80 years. Together they used to go to Belgium to buy pigeons and try new origins.

With a hole in the wall it is better…

Both sexes are played, besides Jean Michel places a lot of hope in a female coming from Daniel Gambart, “we exchange pigeons with Daniel, he is an excellent fancier and we have a good understanding even if we are competitors” he says with pleasure. This black female won the 1st prize of the sub-grouping on Châteaudun in 2020.

For the widowers, the females are never shown before the competition. Youngsters are played on the nest or on a perch, and the original design of the loft for the youngsters was such that the sexes could be separated. But this method of the sliding door did not really convince Renaud who decided to make a hole in the wall separating the two compartments “So they go where they want and when they want. We put trays or straw to motivate them… Sometimes we are surprised by the result: it’s not necessarily pigeons on nest that win the first places but pigeons that just have a perch to defend.” Proof that motivation is above all a matter of individual.

Even if the federals races are the goal, pigeons have to be versatile and do prizes from 100 to 700 km and this for many years “We play pigeons that are 7 years old, this year unfortunately we lost some of them, we have no explanation […] One of the crack pigeons of the colony came home covered with oil six days after the competition! My father called me urgently to come and treat him, he had tears in his eyes when he saw this pigeon come in… Now he will stay here. It was a special year.”

The young males go to 2 or 3races, it’s more a matter of training than anything else, the prizes are not important. On the other hand, the young females go to Guéret or Vivonne (about 500 kilometres). Most of the selection is done on the yearlings. Inbreeding is not Jean-Michel and Renaud’s cup of tea, “the closest we get is cousin/cousin matings. And even then it’s rare!”

No treatment during the season

In addition to the obligatory vaccine, the pigeons have a vaccine against pox, the tandem treats as little as possible with two treatments per year if necessary: one before the season and one when it is over.

During the season the aim is not to treat and to give a minimum of complementary products: water and grain or almost! A solution based on oregano is given, oregano is a natural anti-inflammatory and helps improve the condition of respiratory and digestive systems. Electrolytes are given on return. 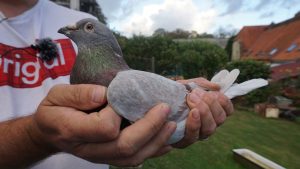 This beautiful pigeons comes from the sire of Peeters Van Crombruggen’s loft and from Lavigne Nicolas’ dam.  On his father’s side we find the lineage of “Kanibaal” from Dirk Van Dyck and “Red Revelation”: