On July the 11th the Tandem Boubet father and son took the first two places in Royan (568km). The second registered pigeon, 315351, a 6 year old pigeon takes the first place and finishes his career in beauty!

The two champions come from the same origin, a cross between two basic origins of pigeon fancier: Gérard Fruitier (click here for the pedigree) X Jean-Paul Thiebaut. 315351-15 finishes his career in beauty with the first place on Royan in front of 3863 old pigeons.

Lofts are located only 5 km from the sea in the small town of Rang-du-Fliers in the south of Pas-de-Calais. Because of geographical position and the importance of winds Johny and his father immediately concentrated on federal competitions (from 400 to 800 km).

Johny, the son, has been involved in pigeon racing since he was a child; without asking too many questions, father and son decided to play in tandem. It’s a well-oiled machine, at a fixed time every day, José cleans and gives flight. Johny takes care of contests, boxing and selects at the end of the season with his father “even if we don’t have the same hand, we have to agree!”

The youngsters are played naturally, the females in particular must prove themselves in their first year. Those that succeed are then kept for breeding. In yearling, the males are then played to the bachelor and then to the widowhood the following year.

On the side of the field, a small garden cottage with an aviary: “These are the breeders, there are about 8 couples, they are mostly good pigeons with a track record! They have severales prices. It’s necessary to be here,” explains Johny. The origins of the colony are 75% pigeons from the late Gerard Fruitier (Pedigree here), a pigeon racing legend and Johny’s mentor: “He taught me all the tricks of the trade, we were often at his home”.

The other pigeons come from fanciers of the Boulogne-sur-Mer group: Théo Martel, Jean Louis Lecaille, Jean Paul Thiebaut, Jules Tronquoy…. In 2019, Johny decided to bring in new blood and bought four pigeons. He wanted to bring back vitality, to have first prizes…. He had a well-known origin in mind: Gaby Vandenabeele. “Of the four, three did well and two are now breeding.” 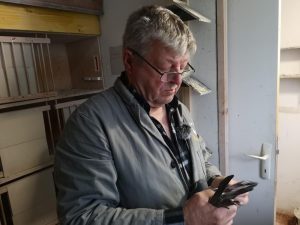 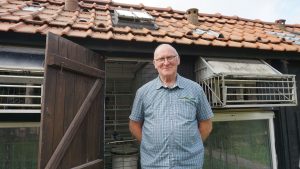 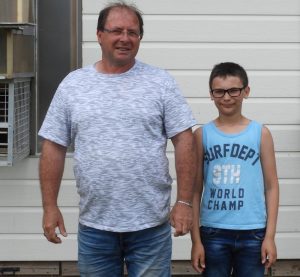