He was crowned three times French champion, for a long time master of speed contests in the Lille region (north of France) and now champion of the Federal (middle distances) and ALC-CALC (long distances) competitions… Georges Herman didn’t miss the meeting of the 2020 season!

In 2019, he won first place in the Federal championship (old pigeon category), this year it is again the first place (for the first three registered pigeons). With great regularity, Georges Herman is present on the top of the podium year after year. However, two years ago, he had taken risks by abandoning his favourite discipline: short distance races!

Very quickly reassured by some nice victories in the federal races (see article), he then decided to extend the distance to play the CALC competitions (Longue french distances races). “The federal races are every fortnight, so every other weekend I got bored… By playing CALC I also race pigeons every week”. At 69 years old he has taken up this challenge and now shines in the long-distance races. 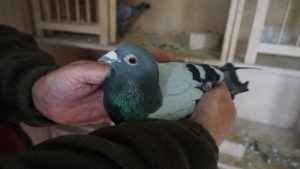 So how does Georges Herman do it?

“My basic pigeons could already do head prizes up to 600 kilometres, I also made crosses with the pigeons of José Derycke of Bondues (in France, just near the Belgian border), then it’s selection”. And to facilitate the selection, the breeder notes absolutely everything! On his notebook, he only needs one glance to spot the best ones. “I only want the best! 3 prices out of 5 I don’t keep… 4 out of 5 it’s starting to be good … »

The pigeon fancier also says that some pigeons need rest between each competition and others don’t. “Some of them, they have to be put on every week, they do 4 competitions in a row, one week a federal and the next one a CALC… that for four weeks and then they have a break (2 weeks). This kind of pigeons, if you stop them every week they don’t come in shape”. So it’s up to the pigeon fancier to spot this kind of individual who can make a series of races, so it’s easier to understand the interest of writing everything down.

For next year Georges is already working on his new objectives: to do even better in the long-distance races and why not play a few females… He who has been practising classical widowhood for a long time, this will be a big first!