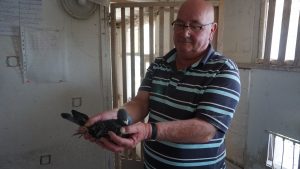 In 1990 Daniel Blervaque moved to Bersée in the North of France, at that time his son Benoît wanted pigeons. He was then the first pigeon fancier of the village. Once the building permit was granted, it took very little time for the pigeon loft to come out of the ground!

The mayor of the village was surprised: a building permit for a pigeon loft, he had never seen that before, but he immediately accepted it. It has to be said that Daniel did things well, it is a real little house and you can walk past it without suspecting that this building lives in a small colony of champions!

“Small colony of champions” is the right term to describe this colony. Indeed Daniel doesn’t have a lot of birds: 24 widowers (old and yearlings), 30 youngsters maximum and 8 breeding couples. A reasonable number which is more than enough for his pleasure but also for his success ” I like to have few pigeons… few pigeons but to know them all by heart “. So the pigeons have space and therefore a lot of air ” I don’t mind if there are empty boxes ” adds the pigeon fancier. Space, but not only, at the end of September 2020, when the temperatures are still high, in this brick loft, but the pigeons also don’t suffer at all from the heat.

Daniel Blervaque has always played in the CALC (long-distance races) competitions and some internationals, he went to find pigeons of good origins to play the marathons races. One of the first pigeons he bought was a female Van De Wegen from Rudi Hermès, this female is one of the basic pigeons of his colony, she will later give ” le Bergerac ” (1st NPDC Bergerac) and other illustrious descendants. In 2018 he is invited to Fugare (the international pigeon show in Belgium) for the ALC-CALC prize-giving ceremony, that year two brothers of nests win the silver ring and the bronze ring ” They always arrived together, two incredible brothers, it was really a very nice sporting year with these two! “says Daniel

This year, he took part in the international competition in Pau and won 2prizes/2, notably with his 108185.16 arrived the same evening at 9.56 pm (378th NPDC / 3034 pigeons). His son, Benoît, who also lives in Bersée, does an excellent performance and wins 12th and 111th place at the National (out of 4287 pigeons), again with 2 pigeons entered. Benoît went to a good school and today he has a lot of success in the CALC and internationals competitions (but we will talk about it later). You will have understood that what counts with the Blervaque is the percentage of prizes and 100% … we can’t really do better.

This year Daniel’s favourite is 361685.2015 also called “Pépé” (grandpa), Now this pigeon will move on to breeding loft after a great career. His last competition was the Roullet-Saint-Esteph on August 28th, a difficult competition ” I waited for him for a long time, in the evening I thought I had lost him… you can’t imagine the relief when I saw him come back ” says Daniel.

Every year, there are between 20 and 30 youngsters, they are not played, indeed Daniel prefers to concentrate on these widowers and likes to put 5 or 6 pigeons per race (12 maximum at the beginning of the season). The youngsters are trained by Daniel and his wife first in groups and then they are released two by two in Bapaume (60km) and then 1 by 1. The system is intended to be as simple as possible, the pigeons receive a depurative mixture at the beginning of the week and a progressively heavier sports mixture until the basketing. Daniel also buys barley and wheat which he mixes into the ration as required. In terms of supplements, the emphasis is on minerals, minerals of all kinds and quantities and almost nothing else! In the water, a little bleach (1ml/l) to avoid bacteria ” I read that in a veterinary magazine since I put it into practice here “, magazines and books, the pigeon fancier have an impressive collection. A mine of information accumulated for many years in which he plunges himself as soon as he has the time ” My wife laughs and tells me “you must know them by heart all your books”, “but this is where you find the information”. At the beginning of the season the pigeons do two-speed contests, then two middle-distance races and finally they attack the CALC contests or the international races, they are basketed every two or three weeks. the females are only shown on the way back, after a while they know it, it’s an automatism.