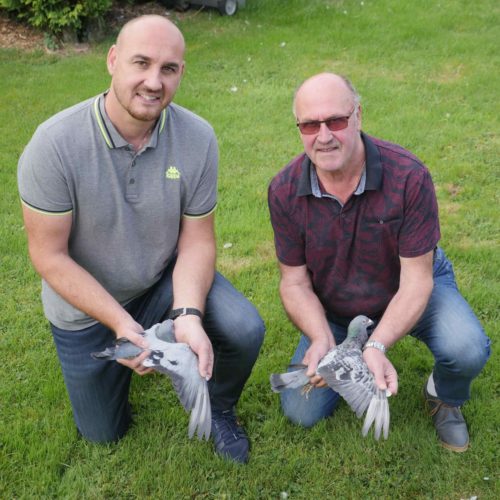 It is in Wallon-Cappel, a few kilometres away from Hazebrouck, that the colony Neuville is established, with 250 birds and placed under the patriarch Dominique Neuville, 73 years old, retired merchant, and his son Gérald. Meeting with the father and the son – third national at the internationals in Pau in July and general old champion at the Hazebrouck internationals in 2020 – who reveal some of their secrets to us.

It is little to say that these two have been “bathed in pigeon” since their early childhood. “Daddy, I’ve always seen him with his pigeons,” says 42-year-old Gérald, account manager. “I’ve always known pigeon racing because I accompanied my father to competitions for years when I was a child”, underlines Dominique, for whom, however, entering the competition is relatively late. We are then in 1998 and destiny makes that the pigeon fancier, who until then was rather accustomed to pigeon beauty contests, crosses the path of a wounded racing pigeon, abandoned to his fate on the side of the road. He tells his owner, Patrick Feryn, a resident of Zuydcoote (in the Dunkirk region of France), which puts him in touch with the lad who owned the parents of the injured bird.

Fortunate circumstance: it didn’t need more for Dominique, a little pushed, it is true, by his son Gérald (then more attracted by the pigeon sport than by beauty contests), for him to carry out his first breeding operation in the same time. The first results came the following season. And they are rather promising: a victory on Limoges, in front of 750 old pigeons in May 1999, at Beauvais. Several years were then necessary to build the foundations of Dominique and Gérald’s pigeon loft, which has now reached such a point of maturity that they are now thinking of devoting themselves exclusively to the old ones.

“What the lineage has in its belly”.

The colony of Dominique and Gérald is today notably composed of 68 widowers, thirteen of which are breeding couples. The origins? From the Rex which made first national at Souillac (Lot) in front of more than 6 500 pigeons in 1999; from the Prince, from the U2 (1st ace long-distance pigeon by Martin Ravelinghen); lines worked for twenty years and some recent introductions (Paarboost, Lucky, Cheetah, Toon…).

The females are no longer raced by the tandem. No time for Dominique, who already spends nearly four hours a day cleaning his pigeon loft. Even if, concedes Gérald, “it’s good to fly the females from time to time to find out what the lineage has in its belly. But this is work that has been done in the past. “They don’t show the females before the competitions either, so as not to irritate the males unnecessarily before the fateful hour.

Their favourite shows? “The approach of the 850 km ” with an early release (Pau and Saint-Vincent types) because the pigeon ” makes the trot in one go ” and ” there is no luck factor in the arrivals “. Delayed releases are never taken into account because it is always possible to see a pigeon that has been woken up early in the morning“, continues Gérald. It’s part of the randomness that we try to avoid“.

As far as training is concerned, the Neuville method rhymes with simplicity: a daily flight of pigeons, in the morning, without a precise schedule. It’s according to my availability,” says the patriarch. I love my pigeons, but I don’t want to be a slave to mealtimes, rest periods and so on. “The training releases are done at a rate of four before the start of the season. Just the story of “getting back in shape, setting up the compass. But I won’t be told that training makes the champion. The origin is much more important in this matter.g »

There’s nothing too fancy as far as food is concerned: “It’s decided according to the seasons. Apart from that, we don’t have a special policy. We trust companies. I don’t see much point in making personal mixes. For me, it’s still just busting my hump for nothing. “You just have to be careful about one thing,” reacts Gérald. The more products we give, the more dependent the pigeon will be, the more fragile it will become. » 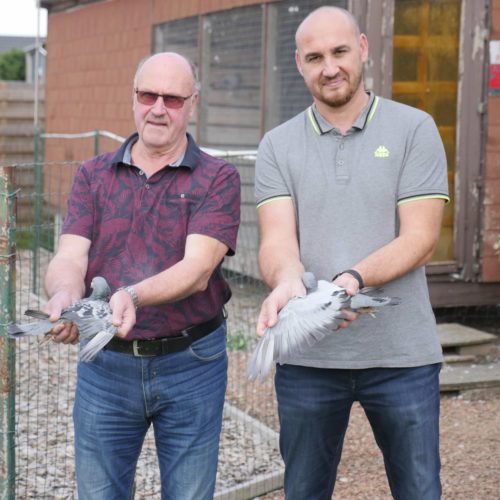 This classic, simple and, why not, traditional method, the Neuville’s believe they have proven its effectiveness through their results. Of which the most striking remains that of Morcenx, in the Landes, in 2003 (11th international out of 19 420 pigeons). “It was the summer of the heatwave, so it was very hot and above all a strong east wind“, says Dominique, who boasts that he only consults a vet for his animals if there is a problem. This year we had zero visits to the vet,” he says. In my opinion, this is a reflection of good pigeon maintenance, pigeon houses and good origins. »

The health of the pigeon, let’s talk about it. Here again, there is no miracle recipe: “The more I advance in the discipline, the more I weigh the importance of the lineage in the health of the beast“, underlines Gérald. That’s why we’re going to look, first and foremost, to see if the pigeon is strong, if it has this pear shape, a solid kidney, a good carcass as well, both front and back,” adds his father. And a bright eye, no matter what the colour. Just well pigmented. An expressive eye. If he has a faded eye, he’ll never make a head price, that’s for sure. »