A look back at Dominique Lebbrecht’s pigeon racing season, from Châteauroux to Agen international, this small colony from Wattrelos (north France) continues to perform well. A year crowned with regular good performances as Dominique likes them since almost fifty years!

Last year we already told you about Dominique Lebbrecht, a well known and experienced amateur who won the first Châteauroux of the season with his 275224.18 in front of 4104 old pigeons.

This year Dominique tried his hand at internationals contests and it was without regret. His 357 Magnum hit the nail on the head. “It was the 379357 of 2015, or the Magnum, that came first! I was surprised, I didn’t expect a pigeon until 6pm at the earliest. On 2 July, 18,056 old pigeons were released from Agen, for Dominique the distance was 776 km. He decided to enter only two pigeons: 379 357 from 2015 which finished 7th National and 34th International and 359395 from 2017 which finished 150th National/ 3383 pigeons and 670th International. In terms of prize percentage you can’t really do better. “The same evening I had to basket yearlings at the club and as I had few pigeons I decided to clock by hand… When the Magnum arrived the constator was still in the veranda! »

The origins of Magnum can be found in the pigeons of Carlos and Xavier Vandemeulebroeck (BE), international winners of Agen 2018.  “In one of the loft we were able to take three pairs each with my brother-in-law. There was one female left that nobody wanted… it’s true that she wasn’t very good in hand. However, on Xavier’s advice, Dominique took the female and crossed her with a male acquired at the same time. After inbreeding and crossing with Dominique’s pigeons the result was more than satisfactory. 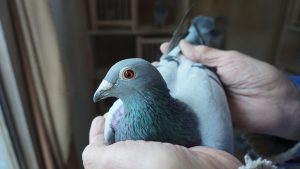 The 275233.18 brother of Magnum came 2nd NPDC (ALC-CALC, longue distance races) at the Nîmes competition this year. A stock that Dominique keeps and maintains with the other origins of the loft: Christian Witendal, José Mesa, André Van Caeneghem or Roger Bayard.

For preparation of internationals, method doesn’t change much: “I add more corn last days but that’s all. These are pigeons that are used to clocking in at 650 to 750 km, so Agen is not really a problem. The habits do not change, pigeons receive a pinch of small seeds on the return of the flock “I have never had any difficulty to bring them in, they don’t even need to call them, they know when I am going to give food”. Hemp seed can be given (sparingly) during the week instead of the seeds, so that they stay well rounded.

The colony has 32 widowers, including yearlings and oldsters, introductions are rare and there is only one round of youngsters each year. “The yearlings are bred after August 22 and I let them hatch twice.

Only males are played, Dominique has specialised in CALC competitions(longue distance races), the pigeons start once or twice in speed and then a half-distance, then it’s often with Châteauroux event that they really start the season. “Between the middle-distance and Châteauroux, there is not even a 100km difference. Next year they will go directly to Châteauroux without going through middle-distance race, and I have noticed that it doesn’t make any difference – quite the contrary!

Dominique doesn’t notice any difference between youngsters who are born in January and those who are born in February, moult takes place in exactly same way. “As I only do one round, there is no point in bothering with youngsters in January. By breeding at the beginning of January, I have one more month of peace of mind”. About thirty youngsters are produced each year, the competitions serve as a learning experience, the selection is then made by hand and on the basis of yearling results. “With so few youngsters I can’t afford to play them to the hilt and lose too many,” explains Dominique, who scans the weather reports before engaging youngsters.