The name of Gregory Fournier is not unknown to the federal players of the 1st Region, already in 2016 he won the federal competition of Souillac (4409 pigeons.)

Gregory lives in Comines. He works as a forklift operator at the Clarebout potatoes company in Neuve-Eglise (B), sometimes in the morning, sometimes in the afternoon and even at night, so managing the colony of 20 widowers and 50 youngsters is not easy. That’s why behind the name of Grégory Fournier hides a trio that does everything possible to achieve top-level performances. It is composed of Cécile, Grégory’s wife, who takes care of the return of the widowers after the morning flight, and Nicolas, the brother, who frees the pigeons for the morning flight and takes care of bringing the pigeons to the local.

In addition to his busy professional schedule, Grégory is the vice-president of Wervicq-sud, one of the best companies in the Lille group, where the competition is very strong. When every weekend you rub shoulders with champions like Georges Hermann-Van Dist, Louis Olivier, Bruno Bailleul, and many others, the places are expensive and this encourages you to progress all the time.

Apart from the youngsters, Grégory plays exclusively with males, specialising in Nord-Pas-de-Calais competitions. The young females are selected in the CALC competitions. The method of play is classic, he never shows the females before leaving, it must be said that it is not practical because for lack of places these ladies are in aviaries with his brother. He turns over the trays for a quarter of an hour and off we go! Most of the time, he is the one who manages to put the birds in baskets, and Nicolas takes care of bringing them to the premises.

As far as the care is concerned, nothing, once again, but the classic, a treatment against tricho when there is a drop in form, and once in the season he treats to clear the airways. For a few years now, the youngsters’ illnesses have been occurring a few days after the first shot, so he gives a “4 in 1” preparation and it passes.
Very few, if any, vitamins are given to the pigeons, but his grain is of good quality, Gregory takes care to feed lightly at the beginning of each preparation cycle to raise the protein content a few days before the competition.
Grégory started to play at 16 years old, after having made his first steps in the speed contests, he was immediately attracted by the federal contests. He built his own loft on a neighbour’s land in exchange for the maintenance of the garden.

The basis of the loft comes from a Belgian pigeon, “le mâcot”, which was lost in Comines, reported, Grégory obtains the card of ownership. This chequerd pied cock was an extraordinary racer. He was first in Saint-Junien in the Lille group in 2010 at the age of 7. Extra in federal competitions, while his former owner only played the Arras every weekend (very short distance). The icing on the cake is that the male’s offspring have been doing well at the loft for two decades, with provincial victories to boot. 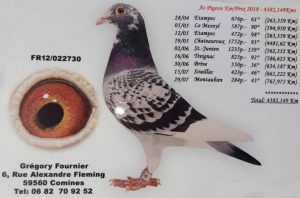 The winning cock in Sables d’Olonne was sired by a youngster bought at the Houten fair, during an outing organised by the Wervicq society. A pigeon from C Wesseling, with blood from Gaby Vandenabeele. (see pedigree). The mother of this pigeon comes from Nicolas, who cultivates the best amateurs of the society of Wervicq-sud. Between the two brothers, the exchanges are constant

How does he manage to stay on top, for so many years ? Easy, not much room, so a severe selection!