Another success for the organisers and the volunteer teams of the CIF, for this edition of Agen 2021, we are close to the 7000 pigeons, that’s a lot (3891 old, 3045 yearlings and 2231 females). We must not forget that a good part of the frontrunners are not able to participate in this stage because they do not have the required minimum distance (700 km). That’s a lot of people including the French International winner of Pau 2021 and champions like Jean Pachla, Eric Vanacker, Richard Rogé, Gérard Ledoux and many others… 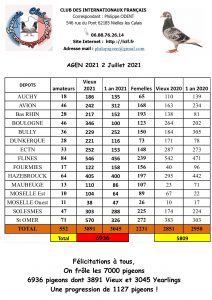 Let’s go back to last weekend’s Mont de Marsan race: “what a contest! “The pigeons met a wall of rain for the last third of the race and despite the reduction of the distance with a release in Mont de Marsan, the returns were going to be difficult, it was inevitable. Hopefully, the missing pigeons will return to their loft as soon as the weather improves.

The east-points of the radius had the advantage compared to the other fanciers. The pigeons flying east avoided much of the precipitation, although the mass was not with them. On these weather pictures, we can see that the pigeons in the front also had bad weather and came back wet.

Let’s not take anything away from the performance of the little female FR-19-139876 international winner, ahead of more than 14.000 pigeons, belonging to Dimanche Jean-Jacques from Cormontreuil, (the southern suburb of Reims), and pigeons in the lead, that’s the big-time!

We should never forget that it is almost impossible to have the same flying conditions for all pigeons in an international competition. The radius is wide, from England (before the Brexit) to Germany, and more than 350 km deep.

In the long-distance race, more than anywhere else the rules governing a competition remain the same:  the wind distributes the (first) prizes, the rain, the heat advantages one region more than the other and it is “to each his turn! “.
The only rule is that when you have the advantage, “you must score”. That’s all that matters!