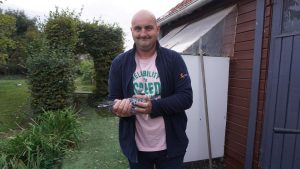 Since the age of 18, he has been taking care of his pigeons, since that day when his father finally built the pigeon loft in Bersée ” Before that we went to my grandfather’s house ! Every weekend! See the pigeons arrive and take care of them “. Benoit did not leave the village of Bersée and as soon as he moved in, the dovecote was built in record time.

With about twenty widowers (8 yearlings and 12 old birds) he plays the CALC contests, but not only… “I like to know what my pigeons can do, how far they can go, I’m a player and I like to go and tease my friends who play internationals contest ! ». That’s why Benoit doesn’t play the whole championship, he reserves some pigeons for the international races. And no question of making specific teams in advance, it’s a question of feeling between pigeons and the fancier. During the season he finds the most motivated individuals, those in the best condition and prepares them…

That’s what happened with two of his pigeons and on July 18th at the Pau international competition, they arrived both the same evening! The 20th international place is offered to him by his 265590-2018, at the national he is ranked 12th and 2nd at his club (Flines-lez-Raches). The second pigeon arrives a little later, 111th at the national. This evening there are two prizes out of two! 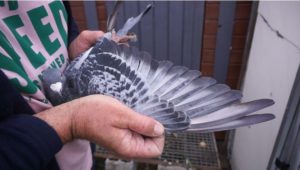 The pigeon loft is based on three strains: Bricoux from the Natural Station in Belgium (Descheemaecker pigeon centre), Marc Philippe (FR) and Roosens.

Four breeding pairs are kept in a separate pigeon loft. The youngsters, about thirty each year, are hardly played, they take part in some speed contests. At the end of August Benoit mates some pigeons and keeps a few young birds (6 or 7).

For the selection there are two criteria: to cover the 850 kilometres have the highest percentage of prize in the long-distance and marathon competitions). For better recovery, the females are shown to the males the day after the return of the race or two days later. The flights’ training is made twice a day according to Benoit working hours.

The method of care has remained unchanged for years, vaccination against paramyxoviruses and treatment against worms at the beginning of the season. To complete the protein ratio and to have good feathers: linseed oil and brewer’s yeast are added to the grain about twice a week. The prescription of vitamins is rare “they must find everything they need in the feed” says Benoit. As a “little extra”, the pigeon fancier administers a homemade preparation based on apple vinegar, ginger and turmeric.

Turmeric is a plant used as a spice, extremely rich in pigments. It contains curcumin (the main pigment of turmeric), an antioxidant and anti-inflammatory substance. Hence its use to prevent and soothe intestinal problems and protect vital organs such as the liver. Ginger promotes the production of digestive enzymes, which will stimulate the pigeons’ appetite. It is also rich in vitamin B9, anti-oxidants, anti-inflammatory minerals and trace elements (calcium, iron, iodine…). Finally, the vinegar will acidify the water for better management of the bacterial flora.

For the grain, the system is simply the standard mixture is given in winter and for the sports season from Frédéric Leclerc’s “spécial grand fond” (the same mixture all week long). Small seeds are used occasionally as a reward or to motivate the pigeons to come home.

In the future, this enthusiast wishes to continue to have fun and improve with nice head prices, while keeping the same style of games and the same number of pigeons ” I admire those who have big colonies, it’s a different style of management! »